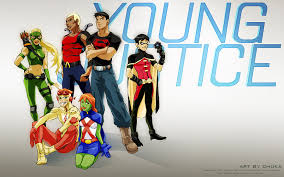 The Story: Good luck!  Try not to get us involved in World War III, hm?

The Review: From the start, this show has aimed for a more sophisticated, mature kind of tone, which is still something of an oddity for American cartoons.  While the creators’ efforts to produce that kind of show has run into sharp corners from time to time, the admirably high quality it’s brought demonstrates just how committed they are to ensuring the series’ success.

Still, they have to keep a younger crowd in mind, which they’ve done admirably by scripting plots that have enough topicality with the real world to stimulate the grown-ups, but dumbs it down enough for the kids to keep up (and maybe get a little enriched in the process—who knows?).  This time around, we have peace talks between the squabbling North and South Rhelasias, the results of which apparently crucial for international stability.

Arbitrating the talks is none other than Lex Luthor, not the greatest choice as he gets targeted by the League of Assassins, who doesn’t give a hoot about collateral damage.  Mark Rolston delivers a fine slipperiness as Luthor, chiding reluctant bodyguard Red Arrow with a finely-tuned degree of condescension.  When Red comments he should let Luthor and Ra’s al Ghul duke out their enmity themselves, the business mogul delivers one of the best lines of the series: “Your stab at pragmatism is, well, adorable.”

Red Arrow’s place in Young Justice took a shaky start in the pilot, and despite showing no hard feelings with his old sidekick buddies, it remained unclear how he fit into the overall team structure.  While disappointing to know Red won’t stick around with the group on a permanent basis, his promise to keep on standby when they need him promises plenty of fun guest shots to come, if his excellent collaboration with Aqualad at the episode’s end says anything.

This episode crackles with energy, and almost all of it comes from the truly jaw-dropping fight sequences.  Its fluid movements, its daring speed, its use of multiple characters in motion, all engaging in fairly complicated choreography (you really get the full marvel of Chesire’s martial artistry, and Red’s extreme archery), yet never missing a beat—you should have no issue calling this excellence in animation, matching and even surpassing many anime series.

Against all this seriousness we also have Miss Martian and Superboy’s first day at school, a big step for both.  The girl alien finally finds the perfect channel for her enthusiasm in cheerleading, while Superboy demonstrates in class a stark contrast between his recitation of downloaded knowledge and his puzzled questions over human custom, like civil war.  These scenes offer a ton of fun, especially in the many Teen Titan cameos, though they beg the question whether or not we’ll ever see them in their heroic guises.

Most of all, the show impresses with its tightly plotted script.  Robinson’s use of the Rhelasia conflict as a discussion topic in teacher Snapper Carr’s class, linking the episode’s dual plotlines together, is truly well done.  Best of all, we finally get to see the identities of the mysterious Light, YJ’s ultimate foes.  You can tell these episodes aren’t just being ground out; each writer builds on the other’s work to deliver a thoughtfully planned master storyline.

– Sigh.  Connor shirtless.  Again.  Really?  Are they really planning to do this every episode?  I had hopes I was just kidding last time, Young Justice writers!

– Where Connor and Megan go to school, superhero T-shirts are the thing, much to Connor’s irritated chagrin.