Not to be outdone, Marvel had me scrambling out of the Batman panel to secure a spot in Marvel: The Next Big Thing. While the X-Men, Spider-Man, and Batman still rule the roost, Marvel’s made huge strides with some of their less famous characters lately and this was the place to hear about it.

Nick Lowe, our moderator and editor of Spider-Man and Moon Knight, took a moment to thank the Chicago fans before introducing the panelists. The first was Mike Marts, an Executive Editor, newly returned from DC’s Batman office. Lowe asked him what it was like to be back. Marts replied that it felt like slipping on an old shoe. Lowe was not entirely thrilled with the analogy, leading Marts to amend his statement, “A shoe that makes a lot of great movies.” Next up was Joshua Hale Fialkov, the writer of Ultimate FF. After him came Charles Soule, the writer of Thunderbolts, Inhuman, and She-Hulk, the last of which received particular applause. Then came James Robinson, writer of Fantastic Four and All-New Invaders. A trio of artists rounded out the panel; Mahmud Asrar, Wolverine and the X-Men; Ryan Stegman, Wolverine; and Skottie Young, both writer and artist on Rocket Racoon. 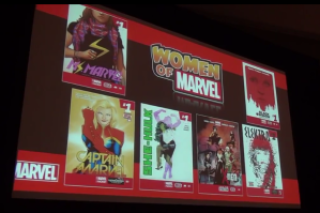 With that, Lowe opened the panel by highlighting some of All-New Marvel NOW’s new series including, Inhuman, Wolverine and the X-Men, and All-New Invaders. Still, the biggest applause was for Ms. Marvel. Hearing the reaction, Lowe insisted that all the Ms. Marvel Fans look up Sana Amanat’s TED Talk, so I’ve saved you the trouble if you’re interested.

That led comfortably into Lowe’s next slide, a series of covers from female led books. “It’s something we’re incredibly proud of over at Marvel,” he said, “We’ve got more books than I think anyone else starring female characters, especially solo characters. I couldn’t help but notice that Dan Didio had made that same claim at New York Comic Con in October, but I believe Lowe was right that Marvel had stolen that honor from DC.

The panel spoke about the new Elektra series and marveled at Mike del Mundo’s artwork. “He may destroy every single person in this room, just by his art,” said Lowe. Mike Marts asked Charles Soule about launching She-Hulk, which I’m happy to report he said is selling “extremely well”. Soule has been stunned by the positive response it’s received.

He also spoke a bit about Inhuman, describing the goal of the book as being to get the classic Lee/Kirby concept to blow up like never before. He explained how a small percentage of the population reacts in wildly different, superhuman ways to the terrigen mists now circling Earth and how the series would affect the entire planet, geographically and culturally. “It’s almost like pokemon, everybody’s trying to grab ‘em up and catch ‘em and see what they can do with them.”

James Robinson spoke about the driving concept behind All-New Invaders, saying that he felt that we’d heard so many interesting stories set in Marvel’s WWII era and that he wanted to try something fresh. Noting that the Marvel Universe is seemingly always being invaded by one force or another, Robinson envisions this team as a special task force to fight off hostile incursions. He also revealed that Toro is, in fact, not a mutant but an Inhuman.

Lowe then announced Marvel’s All-New Young Guns initiative to spotlight emerging artists at the company. The new Young Guns are Sara Pichelli from Guardians of the Galaxy, Valerio Schiti from Avengers A.I., Nick Bradshaw of Wolverine and the X-Men (vol. 1), Ultimate Spider-Man’s David Marquez, Mahmud Asrar, and Ryan Stegman. Marvel thinks of these six as “the next generation of comic book all-stars”.

A rogue comment by Lowe set off a series of murder and Game of Thrones jokes, leading Soule to demand the doors locked and declare the panel a Red Wedding. It was a bizarre turn, but one that, somehow, lead neatly into the next slide, highlighting Wolverine and the X-Men #6 and the new horseman of death. Go figure.

Marts spoke about the next arc of Guardians of the Galaxy, drawn by Nick Bradshaw. This new story will see the Guardians separated and removed from their element, forcing them to track each other down again.

Showing a slide of a Valerio Schiti splash from New Avengers, Lowe warned the audience that Avengers and New Avengers are building to something big; something, he says, that we’ve never really seen in comics before. The two books will lead to a huge story, and Lowe felt that we’d want to be able to say that we were already reading the books when the big moment came. There was no further comment on this upcoming event at the convention, but it’s worth noting that the Avengers are heavily, heavily hinted to be involved in “Axis”, which was announced the next day.

Miles Morales, The Ultimate Spider-Man #3 will feature the return of the Ultimate Green Goblin, drawn by David Marquez. Though it’s not as surprising as in the 616 continuity, Lowe explicitly identified the Goblin as being Norman Osborn, meaning that Miles will be facing off with the man who killed Peter Parker and gave him his powers.

Continuing our tour of the new Young Guns, Lowe announced that Ryan Stegman would take over as the regular artist of Inhuman. Both Stegman and Soule spoke enthusiastically about the potential to create brand new characters for Marvel. One such character is Reader, a brand new inhuman with a very unique powerset; whatever he reads becomes real. That may sound awesome, but Reader grew up in an Inhuman community that wasn’t keen to put out fires every time he read the word flame, or volcano, or dragon, and they decided that the best course of action was to put his eyes out. Soule didn’t go into how this move affected Reader’s relationship with his fellow Inhumans but explained that Reader has found a way around this by using a special ring with a series of brail words on it. He also has a “sweet seeing eye dog” named Foury, which, of course, is short for Four-Eyes. Soule said that they’re trying to create new and interesting characters rather than another character who can just punch hard. Honestly that one character’s concept is the best advertisement for Inhuman that I’ve seen so far.

According to Skottie Young, Rocket Raccoon will be exactly what it says on the tin, a badass Racoon-like alien shooting big guns and being awesome/adorable. Early stories will take us from prison planets to the rigs of space truckers and see Rocket get into trouble when he’s falsly accused of murder – as opposed to the many murders he did commit – and looses Groot in a poker game. On the bright side he gets to take a girl on a date to an intergalactic wrestling match, so you know that’s probably a cool date…or an assassination attempt. “It’s a bromance,” Young says. 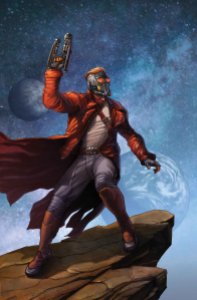 The panel then turned to the Ultimate line, with Ultimate FF. Joshua Hale Fialkov began by reminding us that there had been something of an “accident”, a Galactus got in and ate New Jersey. The heroes of the Ultimate universe managed to defeat Galactus but now they’re picking up the pieces. Ultimate FF will follow a team comprised of Sue Storm, Falcon, Machineman, Tony Stark, and “Doctor freakin’ Doom” who must deal with the dimensional tears appearing in Galactus’ wake. Fialkov says that these portals will allow forgotten versions of the Marvel universe to appear in the series. Issue 2 will see Ultimate Namor returning and issue 4 will see a character from Hunger and Ultimate Captain Marvel appear. “Also Doom has goat legs, did you know about the goat legs? Let’s hear it for goat legs, everybody!”

Lowe warned us to be on the lookout for some, as of yet secret, plans for Marvel’s 75th anniversary, however he was able to announce Marvel’s 100th anniversary celebration. If that seems a bit premature to you, don’t worry, all will be made clear. You see in thinking about many of the 50th and 75th anniversary plotlines the idea came up to take some guesses as to where Marvel’s characters would be a full century after their debut. The resulting five specials will see big crazy plotlines from 50 years in the future released this year. 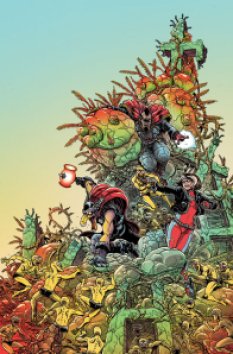 The first, and one of the most impressive, was Avengers #1: 100th Anniversary Special, written and drawn by James Stokoe. The book will feature a team including Rogue, Beta Ray Bill, and Doctor Strange.

Next up was The Amazing Spider-Man #1: 100th Anniversary Special by Sean Ryan and In-Hyuk Lee. Lee’s gorgeous cover depicts Wilson Fisk as Venom, while Peter Parker is suitless.

Fantastic Four #1: 100th Anniversary Special will be written by Jen Van Meter and drawn by Joanna Estep. Particularly at a moment when many are less than thrilled with the current wardrobe for the Fantastic Four, the costumes depicted here are pretty awesome. The cover seems to depict the original Fantastic Four but the panel insisted that all was not as it appeared.

Robin Furth and Jason Masters will be the team on X-Men #1: 100th Anniversary Special. Jason Latour’s beautiful cover depicts the marriage between Emma Frost and PRESIDENT CYCLOPS! Check out that hand; wonder what that’s about.

Guardians of the Galaxy #1: 100th Anniversary Special comes from Andy Lanning, Ron Marz, and Gustavo Duarte. The team’s lineup is particularly interesting with Groot and Rocket still in play alongside a new Drax, a new version of Charlie-27, and a female Star-Lord. Above them all lurks Silver Galactus, a fusion of the world eater and his wayward herald.

Outside of the core Marvel Universe, Lowe announced Empire of the Dead – Act 2, by George A. Romero and Dalibor Talajic, and The Dark Tower: The Drawing of the Three by Peter David, Robin Furth, and Piotr Kowalski.

The floor was then opened for questions.

Asked about some of the new characters, concepts, and series that have come out of Marvel NOW, notably Kamala Khan, Lowe responded “it looks like [they’re] going to be around for a long time.”

Another fan asked if we might be seeing more from the 2099 universe. At first the panel answered that he should pick up Spider-Man 2099 in July, but they seemingly couldn’t help but admit that Doom 2099 will be appearing in Uncanny Avengers.

I asked if there would be crossover between Inhuman and series starring Inhuman characters, like Ms. Marvel. Soule said that it was under discussion but nothing concrete had been decided. He did reveal some other cameos though, with Cap showing up in Inhuman #2 and the Mighty Thor appearing in issue 4.

One of the best questions, in my view, was one fan who asked how Marvel deals with the oversexualization of their female characters, specifically teenage girls. The panel was, thankfully, unanimous in their opinion that this is a serious issue in the industry and that everyone they know at Marvel tries to be very mindful of such things. Lowe said that he feels that Marvel has a very good track record on the subject, better than the competition, and that he attributes this to mindfulness on the part of the artists and a no tolerance policy from the female editors. In short, it was a respectable, if extremely safe, answer.

Asked why Venom joined the Guardians of the Galaxy, the panel answered because it’s awesome. Besides, “Venom is already a space character.”

The final question of the afternoon asked who each member of the panel’s biggest influences from Marvel are. Mahmud Asrar said Claremont and Byrne, while Fialkov pointed to Jack Kirby. Skottie Young credited Chris Bachalo. Ryan Stegman said Joe Madureira. James Robinson answered Frank Miller and Charles Soule picked Brian Michael Bendis. As for the editors, Marts went with Walter Simonson, particularly his Thor work, and Lowe had to go with Claremont. 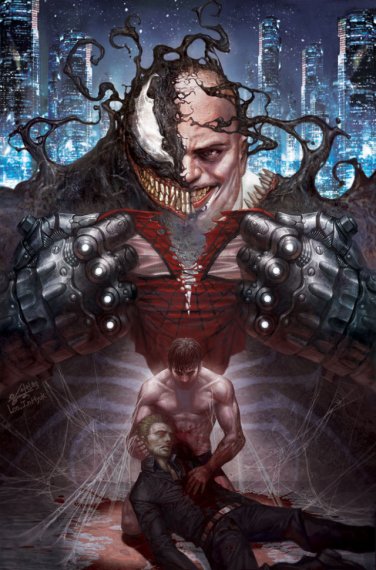