It’s over. Emerald City Comic Con is done for this year. Day 3 was another good day of the con for me.

My day started at Greg Rucka’s table, I’m surprised that Rucka was located on the south end of the convention, where there was less space between creators. Though the line was short, at first I couldn’t get on for fear of blocking the aisle. Luckily I managed to snag a spot before too long. While I was waiting I heard Rucka mention that initially his run on Cyclops was inspired by his relationship with his son, but took on a different tone when his father passed away. This was my first time meeting Rucka and I found him to be a wonderfully real creator. He said what he felt and was genuinely friendly. As he was signing my copy of Checkmate: A King’s Game, I mentioned that I was eager to pick up more of the run, figuring that it was a title he saw a little less often. Rucka wished me luck but bemoaned that it had long been out of print with no sign of change on the horizon. He felt that DC should be doing a better job of keeping stories in print and, while I think that DC’s trade division has been getting slowly better, it was a very fair point.

As I left Rucka I was struck by the artwork on Jen Van Meter’s convention banner and asked her what series they came from. The top section was Kevin Wada art from The Death-Defying Doctor Mirage: Second Life and the bottom came from Hopeless Savages: Break, both out in August. Van Meter was so happy that I asked that she gave me a copy of the first issue of Doctor Mirage. “I’m only shilling for something I love,” she told me, asking me to pick up the new issues in August if I liked it. If you haven’t tried the series, I found issue #1 to be an interesting start. There isn’t a traditional action-adventure conflict, but it definitely feels exciting. If you’re interested in a very grounded Doctor Strange kind of story I’d take a look.

Crossing the Skybridge, I noticed Kelly Sue DeConnick talking to a fan in a Ms. Marvel costume at the image booth. They both looked so into it that I couldn’t help but snap a picture, even if I missed that perfect moment I was hoping for. Regardless, I liked what I got. When the cosplayer and Ms. DeConnick looked like they were done I went up and asked if they were ok with me keeping the photo. They were totally fine with that, but they were both very appreciative that I took the time to ask. On one hand, it seems like that shouldn’t be a big deal, I feel like that was common courtesy, but, on the other, that was all it took to get a smile and a kind word out of DeConnick. It is that easy to make someone feel comfortable. If you’re at a con and you’re taking pictures, remember to ask. 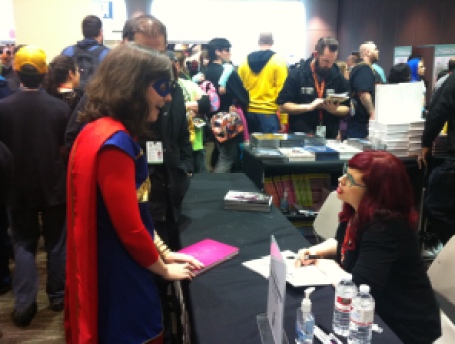 Before long it was time for Hire Me!: From Comics Fan to Comics Professional. Comixology VP of Communications and Marketing Chip Mosher explained that, while there are lots of breaking into comics panels, they’re usually targeted at writers and artists. But what if you want to be involved with comics in a more technical manner or you have different skills that aren’t as obviously needed in the comics industry? Well, for those of us looking to be editors, social media managers, publicity directors, or part of a comics startup, this panel was there. It was definitely humanizing to see some of the quieter workers in the comics industry on a panel for once, I expect that more than one fan who came looking to be a writer or an editor left considering a job in the marketing department of their nearest comic company. I have to say that, as someone interested in editing, the panel was great at addressing concerns that an aspiring editor might have. Plus Comixology co-founder David Steinberger just started giving out kindles to people with good questions! So that was pretty cool.

After that I checked out Marvel’s Next Big Thing Panel. A staple of the Marvel convention schedule the Next Big Thing is usually where books that haven’t been mentioned get some time in the spotlight, but I guess most of them had already been featured. Unfortunately there were no announcements and the panel almost immediately opened to audience questions, but it was interesting to hear the reactions. The big reveal, for me, was that Kieron Gillen is working on a Secret Wars book that hadn’t been announced but he’s dying to talk about. Later in the panel a fan asked about Gillen’s penchant for writing villains and whether there are any big ones that he still craves the opportunity to write now that he’s handled Loki and Darth Vader. With a coy smile Gillen admitted that there are two he’d really love to work with, but that he can’t say who as they’re part of the afore-mentioned Secret Wars project, which was presumably announced today as Siege. Does that make one of the villains Kang the Conquerer, or is there someone else involved?

Another fan mentioned that he can’t believe that he’s ok with Kitty Pryde not being with Colossus, but her relationship with Peter Quill won him over. He asked Mike Marts what it’s like breaking up well-loved couples like Kitty and Piotr or Scott and Jean. Marts answered, rather honestly, that you try to keep things interesting and let the characters guide you. Sometimes it doesn’t work, he admitted, but Kitty and Peter Quill seemed to have that chemistry. He also called “Guardians of the Galaxy & X-Men: The Black Vortex” a love story at heart that came about purely because of the pair’s relationship. He also teased a big development in that relationship at the story’s end.

The last major development for me came from Stacey Lee and a fan who had been kind of unsettled by the spider-pheromone plot point from Amazing Spider-Man. Though he stressed his respect for Dan Slot, he was very grateful that the Silk series had distanced  itself from that. Lee said that this was very intentional and that future interactions between Cindy and Peter will have a new and healthier dynamic. I have to say that I’m thrilled to hear that that element of the character is being put away for a while, as I shared the questioner’s discomfort with it. If that’s been stopping you from picking up Silk, maybe its time to give it a try.

After that I stopped by the Boom! booth and spoke to James Tynion IV and Marguerite Bennett. Tynion was really enjoying the convention and getting to talk to his readers. I told him that, as one of them, I was not happy to hear that he’d be killing off major characters in The Woods. He assured me that some of those won’t be coming for quite some time, but teased big things for the next two issues, saying that the mentions of issue #13 as the start of season two were very intentional and that there would be a time skip between seasons. If you haven’t picked up The Woods, I’ve found it to be a remarkably consistent series, delivering strong stories in a lesser seen genre – or is it genres – month after month. I also took a quick moment to compliment Tynion on the rapid evolution of the series over the last few issues, singling out his handling of Isaac in particular. Tynion admitted that Isaac is the character who has the most of himself in him and said that he feels its important to build characters, to build protagonists, who reflect not only what is best about us but what is worst.

I also discovered that a series of statues that I expected to cost an arm and a leg were actually pretty cheep all things considering. I’m not really much into statues, they’re cool but they just sit there and grow less and less exciting as time goes by. Nonetheless, I had a hard time not drooling over these Dragonball Z statues. Apparently they’re called the Figuarts ZERO series and retail for about $35. My thirteen year old self still can’t believe I didn’t nab Trunks while I could and the Final Flash Vegeta is quite a sight. 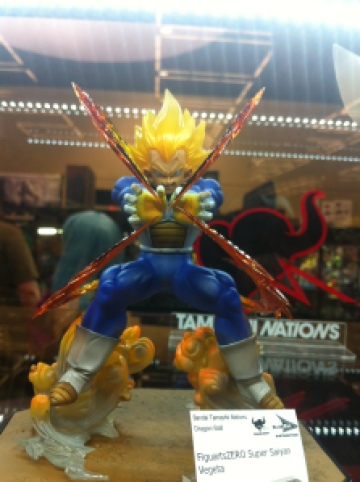 Before long it was time for my interview with Cullen Bunn. I got to ask him some questions about writing Magneto, building a new status quo for DC’s cosmic universe, and his apparent ambition to write every comic ever. I’ll try to have that up for you guys sometime within the week.

After that my schedule was over. I spent what remained of the convention bargain hunting. I found some old issues of Transformers and Nightwing for good prices, picked up a really cheap Marvel Masterworks volume, and even found a couple of issues of Richard Dragon, Kung-Fu Fighter, a series I’ve developed an unfounded fondness for purely because of the long and odd road the characters took to success. I’ll let you know if it’s any good on the site twitter once I get through with them. Do you guys have any series that have earned your affection regardless of their quality?

So ended my first Emerald City Comic Con. Overall it was a great show and a different one from the cons I’ve covered for WCBR before. It’s sad to leave that world, but I’ll be back soon enough, when I head to Chicago for C2E2 in just a few weeks! I hope I’ll see you there and, as always, I’ll be bringing you news, photos, and commentary on all things comics.