There was something fairly light about the first day of this year’s C2E2. The big publishers weren’t out in force yet and, while the turn out was substantial, it wasn’t a crushing wave of humanity the way you’d find at a New York show.

I tried to start my con by getting the lay of the land, but I found myself growing impatient with sifting through longboxes and passing by the same toys at stalls. I wanted to be where the people were! That said, I can’t say I didn’t benefit from the sales. I’d been looking for the original trades of Cable and Deadpool for a long time and Fabian Nicieza was at this show. I may not have succeeded in finding volume 1 but somehow I lucked out and grabbed the first Ultimate Collection for half price!

The highlight of the day was talking with David Walker. Walker made an excellent point about the show, while there was so much to do, there was still a huge amount of time left. He checked his watch and was shocked that it was only 11:30. 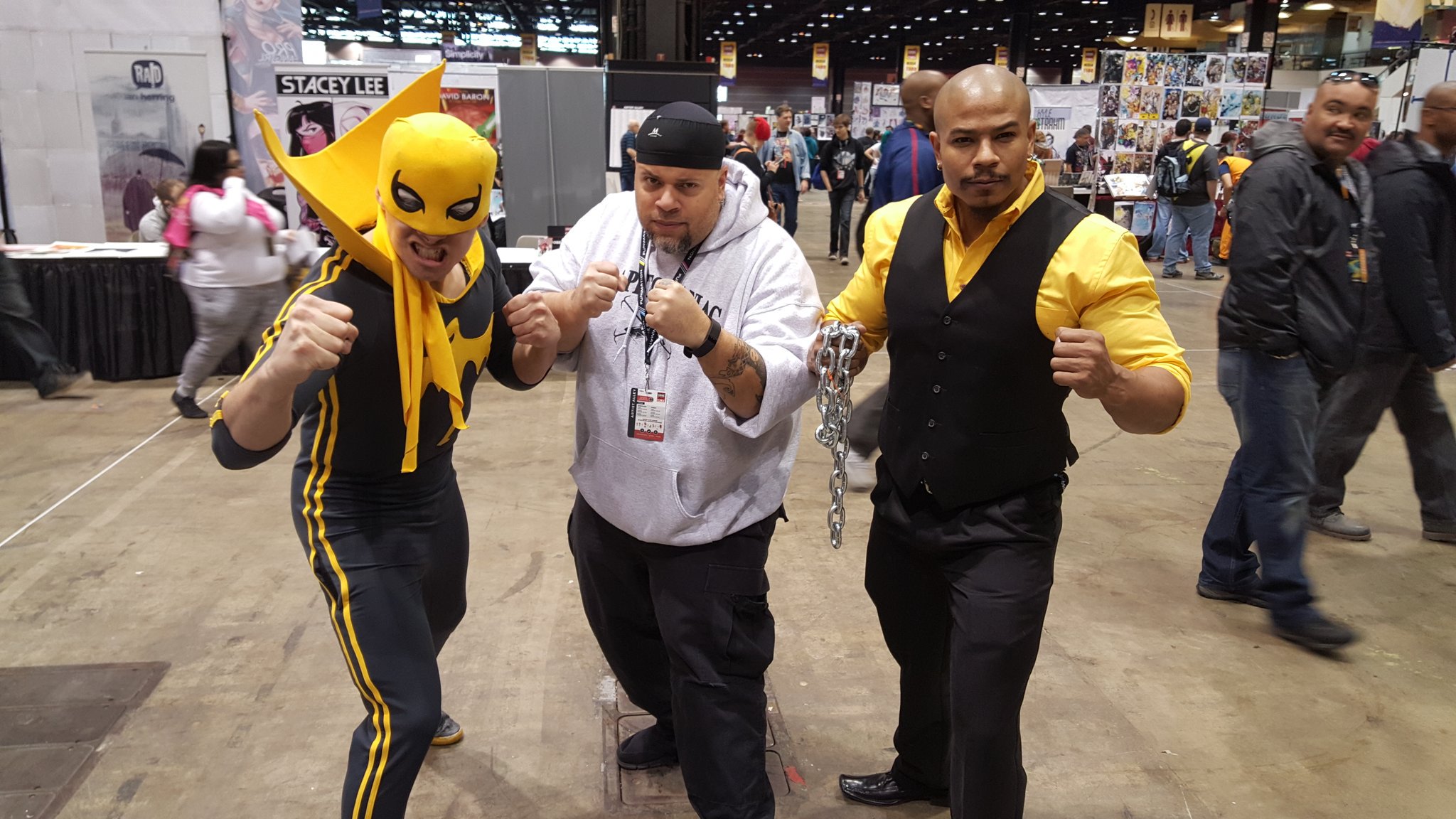 Sweet Christmas, was it fun listening to this guy talk!

Walker was so thrilled to talk with fans about his concerns about the state of diversity in comics and his immense excitement about Power Man and Iron Fist. There’s such joy in Walker’s vision of these characters and such love of their relationship, it was fun to just let him go.

By that point I was already late to the Breaking into Comics the Marvel Way panel. I considered skipping it, having missed the panelist’s stories of breaking in, so I decided to finish out Artist Alley. Most of the creators I really wanted to see were busy with lines or panels, but, while I theoretically could wait, I still couldn’t help but think that there was someone on that Marvel panel that I really wanted to see. So I consulted my schedule and, lo and behold, the panelist I had been so interested in hearing was David Walker!

I rushed back to his table and asked if he was still on the panel. He was, but he said he had time. I asked if he was sure and he said that the panel was at one. “It’s only 11:30,” he told me. His watch had stopped.

Suddenly aware of the situation he and Sanford Greene realized that they didn’t know where they were supposed to be. So I went to the panel after all, with Walker close in tow.

The panel was still plenty of fun. The best part was probably a fan question of a dream project from Marvel. Walker said he’s got dibs on Skull the Slayer. Nick Spenser earned a place in my heart by choosing the 1980s New Mutants team. Hawkeye Artist Annie Wu didn’t have a dream project so much as a general inclination, saying that she just wanted to do something “mean”. Very casually, she elaborated, “Hellish, kind of like a nightmare, that’s just what I’m craving right now.” As for Jordan D. White, editor of Deadpool; Star Wars; and all things strange, reminded Tom Brevoort that he’s been trying to get a magical girl series off the ground at Marvel for years (Brevoort hurriedly reminded him that he had supported both pitches).

After that it was time for DC’s Faces of Villainy panel. DC is in a very strange position at this con, one that they made only half-hearted attempts to hide. Moderator Larry Ganem opened the panel with an announcement of the DC Rebirth live stream next Sunday. “Some of you might know that we’re doing something called Rebirth,” he told an excited crowd, or so they were before he assured them that this panel would not touch on the mysterious relaunch.

That’s not to say that C2E2 was a wash for the publisher, however. With the cards on the table, DC was free to spend this panel celebrating their brand. The panel included Poison Ivy: Cycle of Life and Death creative team Amy Chu and Clay Mann, Doug Manhke; a prolific artist well known for his Green Lantern work, Secret Six writer and comic icon Gail Simone, Scott Snyder, and Harley Quinn artist Chad Hardin.

“You’re not supposed to feel comfortable with the Joker’s smile.” – Doug Mahnke

Ganem started the panel by asking who the panelists’ favorite DC villain was. Hardin stuck by Harley Quinn, Amy Chu backed Poison Ivy, and Gail Simone earned some darkhorse support by choosing Starro. The rest of the panel admitted that their pick was the Joker, leading Ganem into his first set of slides. He asked the panel what challenges them about working with the Joker. Mahnke answered that, for him, it’s all in rendering the smile without making him look happy. Smiles, he argued, are a way to make other people feel comfortable, “you’re not supposed to feel comfortable with the Joker’s smile.” Scott Snyder spoke a little bit about working with the Joker on “Death of the Family”. He stated his opinion that the Joker innately knows what you’re afraid of, what jokes you’re playing on yourself, and revealed that the “DotF” Joker design was based on the events of Detective Comics #1 and not the other way around. He also said that the most surprising thing he ever received from DC was a large box that, to his children’s dismay, contained a lawn ornament in the shape of Greg Capullo’s Joker design.

Simone spoke to what defines the Penguin, saying that, despite his appearance, “what’s inside makes the Penguin who he is.” She likened this to another Batman villain, the Mad Hatter, who she says is the one who scares her most. Gail likes/really dislikes mind control.

Snyder spoke about Mr. Bloom, calling him the Anti-Joker, and spoke a bit about the impetus for his creation. Bloom, he told us was an attempt to tailor a villain to Jim Gordon, a regular guy striving to do right in a dark place. Batman, Snyder admitted, doesn’t solve real world problems, class, race, violence. Bloom was a villain that any of us could become if we lost hope, the one thing Batman can give us.

Clay Mann, noticeably short-winded in most of his responses, perked up to talk about Bizarro, saying that he enjoyed the idea of him being ‘Superman, but wrong’. Simone said her challenge with Bizarro is keeping him from just being funny.

Ganem also caught Chu by surprise when he asked her to pitch her take on Lex Luthor. Chu talked about humanizing Lex, finding what is great and brilliant about him to contrast with just how awful he can be. There was something exciting in Chu’s voice as she spoke, a spark.

Continuing with Superman villains, the panel turned to Brainiac. Snyder said that the core, the fear, of Brainiac is the sheer level of intelligence he has. He really liked Geoff Johns’ idea that the versions of Brainiac we’ve seen are just pieces of something greater. Snyder’s Brainiac would be “Lovecraftian”, something so far beyond our understanding of the world that trying to explain what he perceives would be like “trying to explain math to a cat.”

Snyder also talked about the Cheetah. He says that he has a personal version of Wonder Woman’s mythology in his head and that what appeals to him in the Cheetah is that, while Wonder Woman is the best of gods and men, the Cheetah is what both groups shun and reject. To Snyder, Batman is the answer to problems from the world of man, Superman defends us from the threats of outer space, and Wonder Woman holds back the dangers of myth, of what cannot be explained.

After the panel I defied the odds by getting Scott Snyder to sign my copy of Detective Comics #27 and spoke quickly with Amy Chu. I told her that I would read the crap out of that Lex Luthor series and she said that she was kind of considering it now. I don’t know if its a real possibility or if it’s what she most wants to be doing, but, if you’d be interested in seeing it, the best way is probably tweeting support to @amychu and @DCCOMICS. 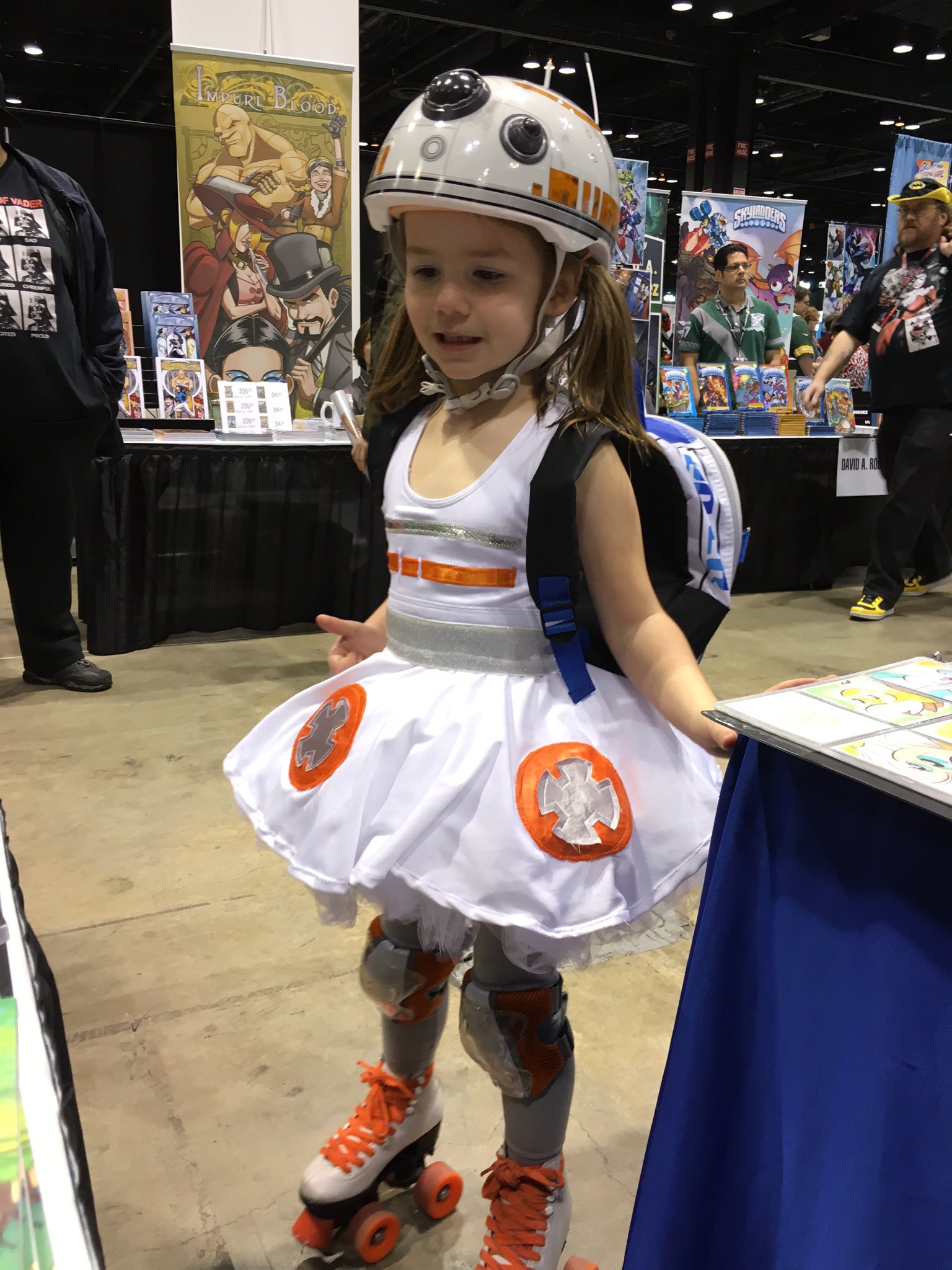 This girl was absolutely the star of day one.

After that I stopped by the Marvel booth to see Al Ewing and get some issues of Ultimates and Loki: Agent of Asgard signed. Ewing, as ever, is a fascinating writer and a lovely guy. He admirably resisted the urge to spoil things, but was willing to say that Carol Danvers fans will have much to look forward to in Ultimates as we ramp up to “Civil War II”.

As the con wound down, I headed back to my room, eager to remove the excessive weight of my bag. I scarfed down some food and headed down to explore the most unique and exciting part of C2E2, the bar.

I’m honestly out of my element in a bar setting but, come C2E2, the Hyatt Regency bar is a fantastic place to be. Friends cluster around tables with Cards Against Humanity or Sheriff of Nottingham, nerds meet and chat in front of massive flat screens playing anime trailers, and cosplayers drink and socialize inches away from industry greats. It’s a fantastic facet of C2E2 and one that’s really helped remind me how normal and awesome the people who make this industry function are. I will say, despite my general resistance to being starstruck, I was utterly unprepared to see the Red Ranger at the bar.

And, so humbled, I returned upstairs to start writing and fall asleep with much excitement ahead of me.