Here we are again. Emerald City Comic Con. For me, this is the beginning of my convention season and I have missed this environment dearly.

Watching the minutes creep by ahead of the first day’s 2:00 start time left me feeling impatient in a way that felt both petulant and justified. But, finally I made the walk down to the convention center.

I came in on the second floor of the convention center and immediately came face to face with my first realization of the show: there is a lot of gaming here this year. The first booth I saw was for Pathfinder Society and the first banner was for Asmodee and, as I reluctantly passed them by for the show floor, I quickly came face to face with their wares again as stall after stall offered copies of Arkham Horror and Captain Sonar. Tabletop gaming is big business at Comic Con and that was apparent from the shops as much as from the inspirations of countless prints and bookmarks on artist’s tables.

I scrambled to get a lay of the land, but I didn’t have much time. Certain I’d waited too long, I rushed down to the third floor to check on not one but two different panels’ lines. To my relief, there was no rush to DC’s Rebirth panel and no line had yet begun for Image’s Announcements panel. I returned upstairs to continue my Con Cartography, snagging stray issues of Batman and the Outsiders and Excalibur at Corner Comics along the way. Before long though I returned to DC’s room.

Scott Snyder is always a gift to any panel he’s on. Tales of attempts to out-sexy the Grayson team and descriptions of his ever growing comics family flowed freely before he even began to discuss upcoming issues of All-Star Batman. Snyder’s current “Ends of the Earth” arc has taken Batman into alien territory where Snyder is free to examine some of the villains that he missed out on during his now famous Batman run. He admitted that some of the artists were chosen to suit the villains while others helped to chose which villains to use. Snyder also shed some light on the Mad Hatter story in issue #8, saying that Jervis has started working on something new, a hat that can re-skin life. Batman sees this as another dangerous invention in the wrong hands, but Tetch sees it as the natural evolution of technology.

Snyder seemed to focus, once again, on the idea of Batman’s assumptions with this arc. Sadly, some other assumptions were challenged. Contrary to DC’s solicitations, Afua Richardson has injured her shoulder and will not able to complete her work on All-Star Batman #9. The good news is that this has allowed JOCK to bring the arc full circle as Batman heads to Washington D.C. Snyder also confirmed that Richardson would be a part of the series as soon as is possible. 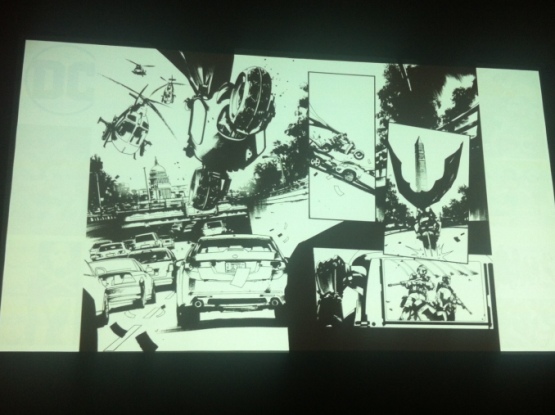 Snyder also let slip(?) that Batman is preparing Duke Thomas for a new role for a specific reason and that we’ll see him come into that role this summer.

Midway through, Gene Luen Yang joined the panel to talk about New Super-Man. Yang traced his cautious history with the title and spoke about the importance of issue #8’s surprising reveal.

For Yang, reclaiming Ching Lung is a natural part of the Rebirth initiative. Rebirth, he reasons, is about reconnecting to DC’s past, and not all of it is history to be proud of. However, Ching Lung is also an opportunity to reflect on how far we’ve come as a society. Regardless of how slow it was or how much more there is to do, eighty years after a Yellow Peril villain graced the cover of Detective Comics #1, there is a Chinese Superman. Not even a Chinese-American Superman, but a Chinese Superman. And there’s a Chinese Batman too, who Yang says came out of the idea of Chinese basketball camps and his realization that there aren’t a lot of hefty asian characters in mainstream comics.

Yang also spoke about one particular idea from New Super-Man, his use of the Bagua. The Bagua are eight Daoist symbols, often knows as trigrams in the west. Yang has used the combined Bagua as a symbol of his Chinese Superman, revealing that each of  Kenan Kong’s superpowers is tied to one of the trigrams and that the Bagua symbol can  be interpreted into the shape of an S.

I was eager to hear more, but I had no idea how long or short the line would be for a panel that replaced Image Expo this year. Luckily for me, it was extremely easy to get in. The panel was entirely devoted to new announcements and, though ably MCed, let the creators do almost all of the talking.

There were fourteen announcements over almost two hours. I note some of the most personally interesting here.

Justin Jordan got two announcements. He opened with Death of Love, a miniseries about a Nice Guy, “capital N, capital G”, deciding he’s had enough of being ignored and taking out his frustrations by going to war with Cupid. The art is by Donal DeLay and Felipe Sobreiro

The Family Trade is a new ongoing from Jordan, Nikki Ryan, and Morgan Beem. Beem is a fully traditional media painter and her work looks gorgeous. Jordan called the series Oceanpunk and assured the crowd that that was definitely a real thing. Expect Indiana Jones style adventure on a floating city as The Family steals, blackmails, and kills to keep The Float afloat. 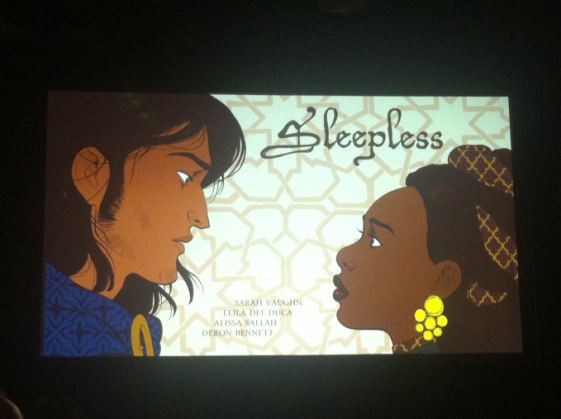 Sleepless scratched my fantasy/historical intrigue itch and threw in some romance for free. Set in a world based off of 15th century Italy and Morrocco, it looks at the romance of a princess and one of her knights, who, as is traditional, has been enchanted to never sleep so that he may protect his lady. The series will look at their romance as well as some of the negative effects of not having to sleep. The book is written by Sarah Vaughn, drawn by Leila Del Duca, and colored and edited by Alissa Sallah, fresh out of college and making some awesome sounding comics.

Ales Kot proved to be quite the presence at the podium, pitching two series to the assembled crowd. The first, Generation Gone, is about a troubled couple who gain superpowers. Kot called it “Unbreakable meets Eternal Sunshine of the Spotless Mind.” The series will be a meditation on youth and seemingly on hopeless youth.

Kot also introduced The New World. Set after the next American Civil War, on the quake-ravaged north side of the Mexico-California border wall, the book follows an unlikely love story. “Romeo and Juliet if Romeo were a paranoid hacker and Juliet was a reality show star/cop/reality show cop.” The book will be illustrated by Tradd Moore, the best of his career, according to Kot.

Generation Gone and The New World are siblings, said Kot, two pieces of one idea. They are both about “love, fate, and action.”

Though there were many promising books, for me, the most exciting was, perhaps unsurprisingly, pitched by a somewhat nervous Jordie Bellaire. The renowned colorist took to the stage to reveal Redlands, she and Vanessa Del Rey’s new satanic witch police comic. ‘What if the witches from Hocus Pocus won?’ said Bellaire of the concept. Well, they would need to control the town, and what better way to do that than to become the law. It’s a story about triumph over the patriarchy and what the patriarchy will do to reassert dominance. Misogyny, racism, corruption, the criminal justice system, Redlands will be all about everything that makes Bellaire furious.

With gorgeous art from Del Rey and Bellaire’s award winning colors, it’s, at the least, bound to be a visually stunning series.

After the panel there wasn’t much time left. I spent my last hour in Artists’ Alley. Already convinced that this was a notably quiet day, the point was hammered home by the minuscule line waiting for Scott Snyder in one corner of a ballroom.

I spent the fleeting minutes of the con talking to creators I’d mostly already known. I checked in with Corin Howell and Clay McCormack at table M2. I lurked around P4, unwilling to interrupt another fascinating conversation between David Walker and a fan. I even got to have a nice chat with Natasha Alterici, the creator of the now monthly Heathen and a huge amount of breathtaking paleoart.

But, alas, today was a short day and before long it was time to go.